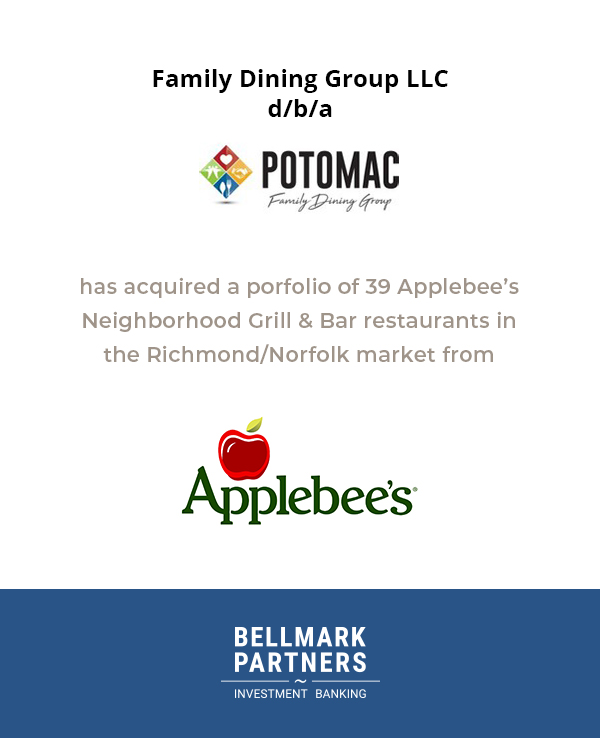 Restaurant operator DineEquity Inc. said Tuesday that it plans to sell 39 of its company-owned Applebee’s restaurants in Virginia to Potomac Family Dining Group for net proceeds of $25 million.

DineEquity, which owns the Applebee’s Neighborhood Grill & Bar and IHOP Restaurants chains, expects the deal will close in the third quarter of 2012.

DineEquity, based in Glendale, Calif., acquired Applebee’s International in 2007 and has tried to shift more of its restaurants into the hands of franchisees to lower its costs and increase its revenue from franchise fees and royalties.

The company has sold a total of 342 company-owned Applebee’s since the acquisition. When this latest deal is done, 96 percent of its restaurants will be franchised, which frees up the company’s cash to pay down debt.

Potomac Family Dining Group, which was created in 2010 to acquire Applebee’s restaurants, operates franchised restaurants in the Washington, D.C., and Virginia area.

DineEquity said it will update its full-year financial guidance once the deal is complete. The company reported earlier in the day that it moved to a profit for its fiscal fourth quarter after paying down debt and making other moves that helped it avoid a repeat of a large quarterly loss a year earlier.

Let’s discuss how our tailored M&A advisory and investment banking services can help you craft a solution to achieve your specific strategic and financial goals.